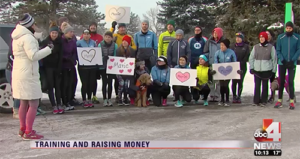 They gathered at Sugarhouse Park with a dual purpose, to train for the marathon, but also to raise money for research at the Huntsman Cancer Institute.

One of the teams is named Marie, after a woman who ran with them for 9 years, but died from breast cancer last year. Jen Murano says “Because of her, she raised thousands of dollars herself and they actually spawned a team in her honor and raised over $190,000 for cancer research.”

These dedicated runners train all year. They start in October and run straight through the spring so they’re ready for the big marathon.

Check out the video.